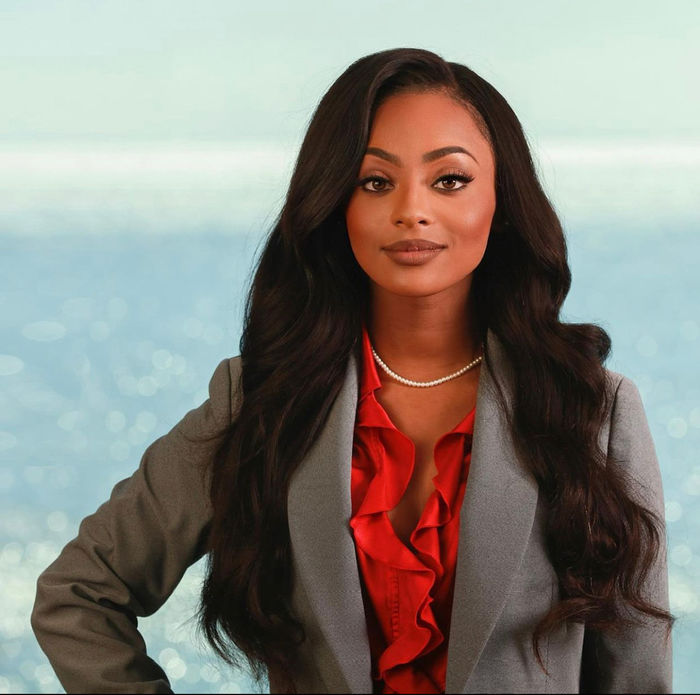 When Khadesia Walker arrived at Penn State Altoona in 2015, she had a clear academic plan—enrollment in the 2+2 program for engineering. Everything else was a bit less clear.

Coming from New Haven, Connecticut, Walker wanted to create a place where she felt safe and comfortable, a place that felt like home and family. “I went in with a clean slate, and I think that’s what made my experience at Penn State Altoona special. I didn’t go in with a pre-painted idea of what should happen. I just painted my own picture while I was there.”

Walker got involved in as many extracurricular activities as she could. She joined the Alpha Sigma Tau sorority and became its merchandising coordinator. She became a Lion Ambassador and a peer leader. She participated in the Black Student Union as well as the Caribbean Association. She used her time at Altoona as a growing period, to navigate what worked for her when it came to things like studying and completing assignments, to figuring out where her passions lay and where she saw herself in the future. “That’s something I value about starting at Altoona. It gave me time and space to find my people and my group and to figure myself out. It was perfect for me.”

Walker says part of her self-discovery process was realizing by the end of her first year that engineering really wasn’t the right fit for her. She considered architectural engineering, then civil engineering. She thought about biology and political science. Finally, she decided that economics made the most sense for her with its broad range of applications including finance and business.

Feeling confident and prepared for the next step in her academic career, Walker transferred to University Park and finished her degree in December 2019. Soon after, she was hired by PMA Companies in Wallingford, Connecticut, as a worker’s compensation claims adjuster. She worked there for about two years, then accepted a job with Morgan Stanley in New Haven, Connecticut, as a branch administrator.

“I get to do a little bit of everything. I’m always busy, but it doesn’t feel like work because I get to be creative with how I accomplish my workload.” Some of Walker’s responsibilities include human resources, onboarding, planning and carrying out events and gatherings, expenses, and making sure her branch is aligned and running efficiently. Morgan Stanley also affords her time to study for exams to become a financial adviser. “I’m learning more about the financial industry, networking, and doing everything I like to do. I love where I’m at now, and I’m so happy I made this switch.”

It’s a great success story, sure, but there’s more to it. There is more to Khadesia Walker.

The Business of a Boutique

Like millions of people around the globe, Walker found her trajectory altered by COVID-19. At the beginning of the pandemic, she was working at PMA Companies full-time and waitressing part-time at a restaurant. When that restaurant was forced to close, Walker found herself with extra time and energy on her hands. “I remember thinking that I wanted to do something I could call my own. I wanted to find a creative outlet for myself that also utilized my degree and would earn some extra income.” 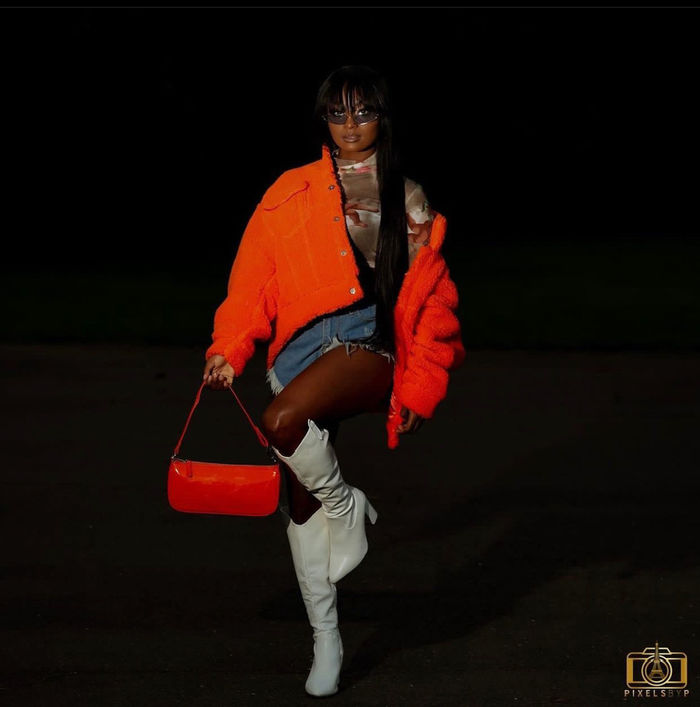 Khadesia Walker models some of the clothing from her boutique.

As she considered her options, Walker felt herself pulled toward fashion. She says that she developed a love for clothing as a child. In middle school and high school, friends even paid her to customize jeans, design and cut up shirts, and tie-dye different articles of clothing. “I have an emotional connection to fashion because it helped me build my confidence growing up. Now, nothing makes me feel better than putting on my favorite outfit and having fun with colors and different accessories.”

So far, Walker is pleased with the boutique’s progress and direction. Of course, it hasn’t been easy. Amid an ongoing global health crisis, political, social, and economic unrest, Keke Mary Styles has had several highs and many lows. “Sometimes it’s busy, sometimes it slows down. As a small business owner, you don’t necessarily see a huge profit, especially right away as there are a lot of costs in the beginning. But any extra money is good for me.”

Even with the hard times, Walker says she is not one to give up. In fact, she is working on ideas to take the boutique to the next level. 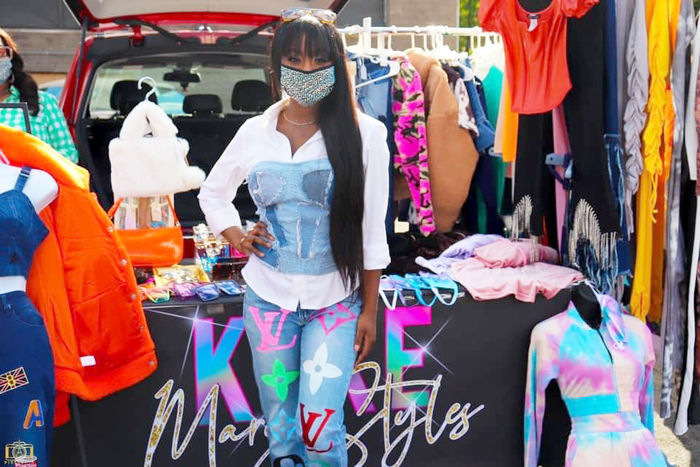 Khadesia Walker poses with her Keke Mary Styles wares at a popup shop.

One concept is couture gowns. Opening the boutique stirred Walker’s old love of participating in pageants and modeling. For a recent pageant, Walker designed her own gown which was a fun experience for her. She says that’s something she can see herself doing for Keke Mary Styles as well as offering custom and pre-made couture gowns. She’s also considering building her own brand for accessories like purses.

“I’m just going to keep working at it. I realized that in life, I need and want a balance between my work and my passion. My store is that balance. Even when it’s overwhelming or when I’m tired, it’s my outlet, it’s my art and adventure. I don’t want to stop.”

In the meantime, Walker puts her energy into where the boutique is now and her soul into the empowerment movement born out of it./p>

As Walker reflected on the boutique and what it meant to her, she began to wonder if there were something more she could do with it. She thought about her own support system and the role it played in her successes and confidence. How could she pay it forward and be a mentor for other young women? 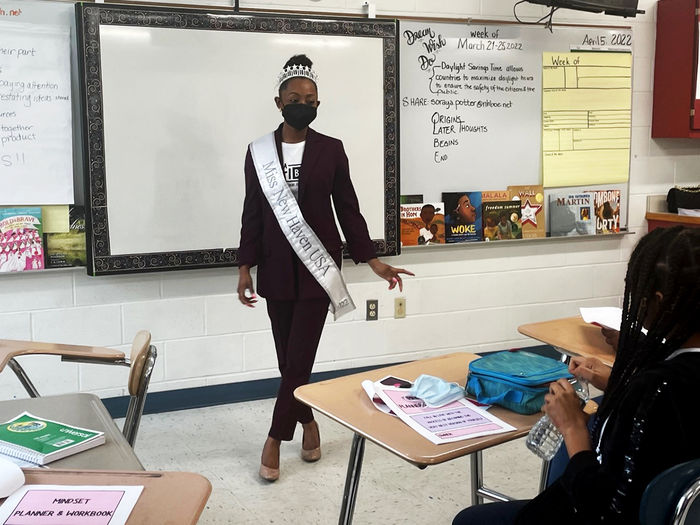 The idea of creating a purpose behind the fashion formed and turned into the hashtag movement #ImaGirlBoss.

“My goal is to encourage our young girls and women to become the best versions of themselves, to be confident enough to take charge of their lives and ambitions and pursue them while being true to themselves.”

Walker made #ImaGirlBoss t-shirts as the front of the empowerment cause. To her surprise and pleasure, the idea was well-received. People were interested, so she expanded on it. She put together an #ImaGirlBoss workshop complete with a workbook on how to create and maintain a healthy mindset. She took the workshop into a nearby middle school and presented to a group of young women.

“I really want these young women to know that there’s a purpose and a path for each of them. I want them to feel guidance and support through #ImaGirlBoss to find their way, to be confident in themselves, and love themselves.”

Walker is hopeful that #ImaGirlBoss could someday be implemented in schools across Connecticut, even available to young women across the country.

She says from starting at Penn State Altoona as an engineering major to where she is now, and everywhere in between, it all unfolded as it was supposed to. She believes the same for her future. “I think what makes Keke Mary Styles and #ImaGirlBoss exciting is not knowing where they’re going or where they will end up. But I know wherever they do, it’s exactly what is meant to be.” 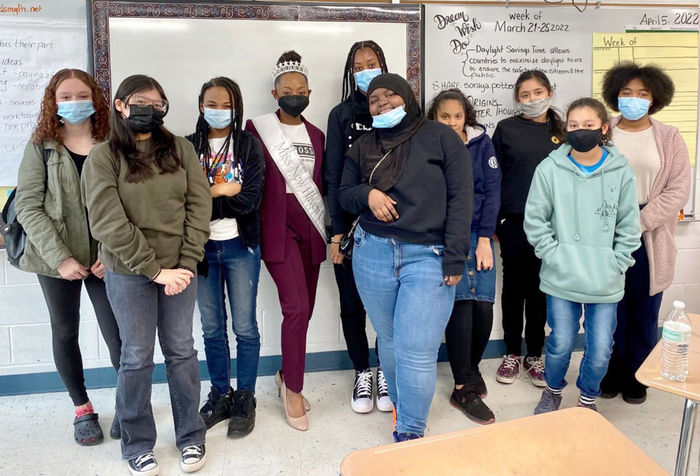 Khadesia Walker and the students from the #ImaGirlBoss workshop. 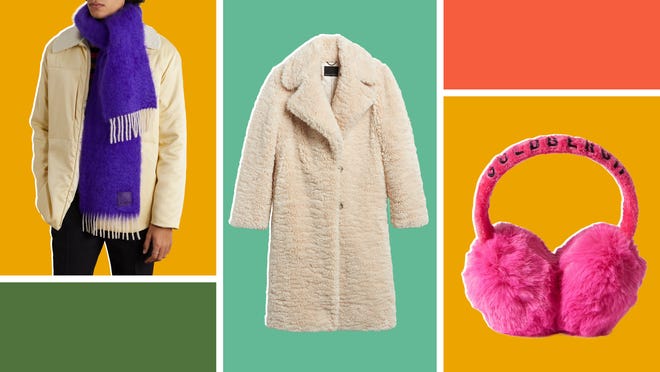